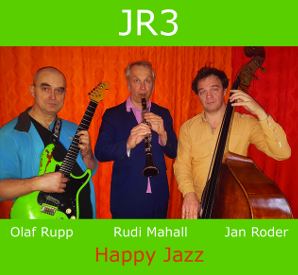 In the early 2000s the all members of JR3 lived near the same park in Berlin and were able to meet and improvise happy chamber music without drums (...aah) in their living rooms. As a result of these sessions JR3 was awarded a 'studio award' from the Berlin Senate, through which the first recordings became available to a small circle of insiders.
Through the years, JR3 played many happy concerts over and over again, eventually also gaining the attention of the New Yorker label 'relative pitch'. At last, the new CD 'Happy Jazz' is available for your enjoyment.
Fundamental to their music in their view, is the interconnected spontaneity, and that virtuosity and simplicity, as well as the strict and the flippant are placed in direct and peaceful proximity to one another. Like a societal concept, these poles are allowed to coexist and to combine as a collage. Yet they are also able to come together with surprising speed and precision. 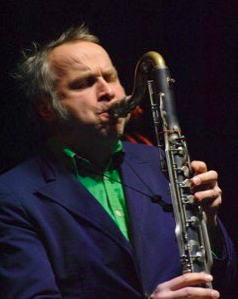 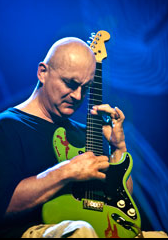 Olaf Rupp (*1963) plays Improvised Music on the acoustic and electric guitar. The organic flow of his music is controlled neither by chance nor by dominant, wilful decisions. In his music he explores how more or less dense murmurations of notes (motion-clusters) can be perceived as one agglomerated sound in motion. This means that every note is a dot in a higher matrix and its colour is more important than the position of that note in any hierarchic classification system. So a sequence of notes creates a moving sound, not a melody. And the intrinsic colour of every note is more important than the melodic or harmonic burden which the listener may or may not put on it. Besides many cooperations five solo albums are published so far on the labels FMP, GROB and GLIGG. Olaf Rupp has been touring in many countries and performed with extraordinary musicians such as Paul Lovens, Tristan Honsinger, Peter Brötzmann, Butch Morris, Lol Coxhill, John Zorn und Michael Wertmüller. Important groups are among others XENOFOX, his duo with Rudi Fischerlehner, a Duo with cello player Ulrike Brand, DIE DICKEN FINGER with Oli Steidle and Jan Roder (also a quartet with Peter Brötzmann) and WEIRD WEAPONS with Tony Buck and Joe Williamson. www.audiosemantics.de 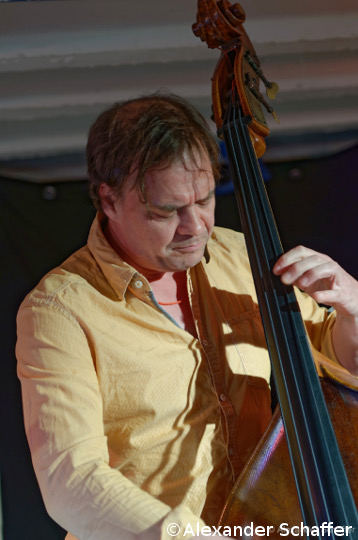 Ok, let's not judge this one by its cover. These guys do not exactly look like happy jazzers, but crack the CD open and listen, this is intense music, vivacious, vigorous, and full of lively twists and turns.
Happy Jazz delves into free improvisation with zeal, electric guitar lines snake around expressive bass work while bass clarinet melodies range from sonorous to squelching. The total sound is rife with possibilities and the trio explores them all. JR3 is named after Jan Roder, the bassist in this Berlin-based trio, along with bass clarinetist Rudi Mahall and guitarist Olaf Rupp. All renown members of the European experimental music scene, it is exciting to hear their restless music on the adventurous Relative Pitch label.
The title track begins with a gentle melody introduced by Mahall and soon accompanied by crisp atonal sweeps and crunchy tonal clusters from Rupp. In his more brittle moments, the guitar work is slightly reminiscent of Derek Bailey, but Rupp has a textural approach that is all his own. Roder, via elongated bowed notes and rapid pizzicato flights, connects the musicians with aplomb.
The group's close listening and lightning fast reactions are exemplified in the track 'Das Bildnes Der Doris Day'. Beginning with quick burst of activity from Rupp and a sizzling stream of notes from Mahall, the musicians seemingly go off in separate directions, yet always remaining tightly connected, finding ways to hook into each other's musical tangents. Another highlight, especially for the guitar fans, is 'Arm durch, Kopfuber', where Rupp can be heard dropping chord shards and spicy counter-melodies to Mahall's zig-zagging bass clarinet lines. His blustery scampers around the fret board is mesmerizing. Roder's solo, as much as it is a solo and not just the song, scratches, stretches, and slides about while Mahall loops around with bubbly melodic lines and hackle-raising squawks.
Happy Jazz is a really great document of contemporary free improvisation coming out of Berlin. It isn't always an easy album, but it is happy: the joy of playing, experimenting, and creating really shines through.

R3 [OLAF RUPP / RUDI MAHALL / JAN RODER] - Happy Jazz (Relative Pitch 1055; USA) The JR3 are Rudi Mahall on clarinet & bass clarinet, Olaf Rupp on electric & acoustic guitar and Jan Roder on double bass. The title of this disc, ‘Happy Jazz’, as well as the modest picture of three “normal” looking musicians on the cover are meant to be rather ironic or at least tongue-in-cheek. All but one of the tracks were recorded in a studio called Happy Barn so consider that as well. No doubt you should recognize the names of these three Berlin-based musicians from a host of previous sessions: Olaf Rupp (solos, duos & trios with Tristan Honsinger, Joe Williamson & Michael Wertmuller; Rudi Mahall: prolific sessions with Alex Von Shlippenbach and Aki Takase and Jan Roder: Die Enttauschung (w/ Mahall), Schlippenbach and Ulrich Gumpert.
This sounds like an all improvised session and a strong, spirited and often intense one. There are moments when it is difficult to tell who is playing what since Mr. Rupp sounds like he is manipulating his strings with objects and the bowed bass and quirky clarinet play in similar timbral or textural areas. There is also a dark, brooding, hypnotic quality to much of this, certainly not happy jazz but equally effective. Guitarist Olaf Rupp does a fine job of creating these eerie swirls which sound great with ever-shifting clarinet and contrabass excursions. There is section on the fourth track where things erupt and move into a furious exchange, all three players navigating quick rapids together and sounding like one focused force combined.
What I find most interesting about this is that even though it is referred to as “happy jazz”, it doesn’t quite sound like “jazz”. It does sound like some incredibly creative free improvisation which is restless and always engaged. This activity does make me smile and will no doubt make that serious listener happy as well.
- Bruce Lee Gallanter, DMG